Sexual function is one of the most important and valued features in the organism. Known as penile erection, the issue presupposes elevation, hardening and enlargement of the penis. However, achieving erection naturally, males do not usually think about the ways of its occurrence, but the vast majority of people with erectile dysfunction try to understand the whole process. The slightest impairment at any stage can result in severe complications gaining and holding an erection. Therefore, it is inevitable to be aware of the processes that happen during male erection. 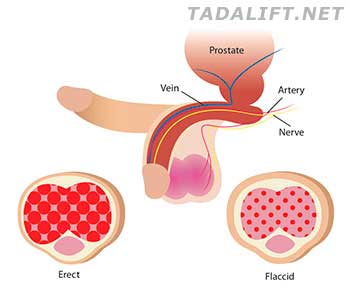 Despite it is not seen visually, the penis features three separate masses of cylindrical tissues, which are known as erectile tissues. Fibrous tissue binds them together. Corpora cavernosa are the two areas that are identical and run along the penile sides. The third mass is corpus spongiosum, which is placed below corpora cavernosa, surrounding the urethra. This mass can also expand and form the tip of the penis. These three masses resemble a sponge, as they have large spaces between the loose tissue networks. In case a penis in a resting state, the areas are collapsed, while the tissues are condensed.

However, the moment erection occurs, the blood starts circulating faster, boosting an advanced flow to the above mentioned spaces. Consequently, penile distention and elevation appears. Psychological and physical stimulation can increase the amount of blood reaching the penile area, which will contribute to the duration and quality of the erection. When the blood enters, the volume and rate of blood leaving the penile area gets decreased. The moment erectile tissues start enlarging, extra pressure causes the veins squeeze against the fibrous tissue, inhibiting the blood outflow. The penis gets back to the flaccid state the moment arteries begin to relax and contract. Then, the blood flow to the penile area is decreased and reduced to its normal rate and volume. The blood starts draining from the erectile tissue, pressure on the veins is decreased and circulation goes back to the normal rate.