Although the therapies to solve the various problems that cause an erection disorder have made giant strides, especially in the last two decades, none of them is free from side effects, contraindications in part still to be defined and failures to understand. For this reason the expectation on the possible clinical use of any other new drugs is high and this above all to allow the andrologist to overcome all the particular clinical situations and the specific needs of each individual with more targeted, specific and tailored treatment protocols a man who has a problem having a valid rigidity and therefore allowing him a regular and quiet penetrative sexual activity.

In the world it is estimated that around 10 – 20% of the male population complains about having a penetrative rigidity. Erectile dysfunction (ED) can be triggered by various psychological problems, cardiovascular diseases, diabetes and incorrect or incorrect lifestyles; the correlation between smoking, bad eating habits and ED is well known.

The treatment of ED, initially limited to surgical indications (prosthesis, vascular surgery) and intracavernous or intraurethral administration of vasoactive drugs, had an incredible development in the 1980s / 90s thanks to the more precise information acquired on the many mechanisms of relaxation of the smooth muscle of the corpus cavernosum of the penis that allowed us to discover nitric oxide (NO) as the most important peripheral neurotransmitter involved in favoring the complex mechanism that leads to having a normal erection. 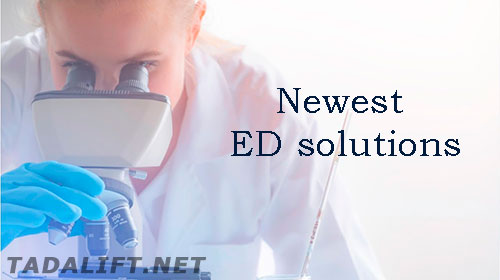 All this has led to the development and use of drugs, administered orally, and among these the “predominant” inhibitors of phosphodiesterase type 5 (PDE5i), ie well-known drugs from the family of tadalafil (Cialis), which however are not always able to solve all the various and complex erective problems that arise.

Today we verify that about one third of ED patients do not respond to the usual PDE5i therapies. Adverse events occur in about 25% of the subjects being treated and are mainly characterized by minor disorders such as: headache, pain, muscle contractions but very rare and serious adverse events such as convulsions, ischemic optic neurites or acute loss are also reported of hearing; the role of PDE5 inhibitors in causing these more serious side effects remains a very controversial issue and most of the observations and reports made on these issues are not very precise, not always well documented and rather approximate.

However the most common reasons that lead to not taking these drugs anymore are above all their lack of effectiveness and also their cost, today a factor not to be underestimated especially in times of “critical economy”.

All these observations, in recent years, have meant that the attention of many researchers has also focused on the mechanisms and substances that have an activity in the central nervous system capable of triggering and regulating a normal penile erection and all this led to the identification of other important mediators able to determine the impulses that favor a physiological rigidity, such as for example Dopamine and Melanocortin.

The first drug in any case with a central action, used clinically, was Apomorphine which acts by binding to the receptors of hypothalamic dopaminergic neurons; the hypothalamus is an important area of ​​the brain located in its central and internal part and is a real command center. However, sublingual apomorphine use was less effective than expected (more than two thirds of patients do not respond to this drug) and therefore rates are met.