Numerous clinical studies and researches reveal the harmful influence of insufficient hours of sleep on the human cardiovascular system. The major problem, which is provoked by too little night rest is high blood pressure. Besides, inflammation of endothelium is also common among people who lack good sleep. Endothelium is an inner lining of the blood vessels. Its inflammation leads to increased risks for coronary artery disease.

What are the norms of sleep and how are they violated?

According to the American Sleep Association, a healthy adult should have about 7-9 hours of sleep. However, the same source claims that 37% of people between the age of 20 and 39 sleep less than they should. A similar problem is true for 40% of adults aged 40-59.

26% of Americans sleep about 6-7 hours per night, whereas 20% have less than 6 hours of night rest. Such sad statistics cannot but worry, especially taking into account that 47% of US residents (according to CDC) have at least one of the three most common factors of risk for cardiological diseases. These are: 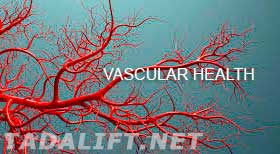 The link between high blood pressure and insufficient sleep has already been proven. However, a recent study, performed by the Spanish scientists revealed that shortage of sleep as well as insignificant (at first sight) sleep disorders play a huge role in atherosclerosis development.

What is the connection between a lack of sleep and atherosclerosis?

A study published in the Journal of the American College of Cardiology claims that poor quality of sleep (frequent wakeups, insomnia) significantly raises the probability of evolving atherosclerosis.

The mentioned study covered 3974 people. Their average age was 46 years old. None of them had any known cardiovascular issues. All the participants were divided into four groups based on the time they spent sleeping.

The results turned out to be astonishing. Those who had less than 6 hours of night sleep were 27% more likely to get atherosclerosis if compared to people who had enough sleep. However, the results connected with the quality of sleep were even more surprising. It turned out that 34% of people who have restless sleep or wake up several times during the night are likely to suffer from atherosclerosis.