Prevention of male sexual health passes through palpation or self-palpation of the testicles. A simple gesture to carry out that could save the lives of many people, even young people. Testicular cancer affects men between 15 and 45 years of age and in recent years has recorded a 12% increase with an estimated increase of 30% by 2025. Fortunately, its mortality rate is rather low, maximum 20 %, but it could contain even more if we managed to get a clear and precise message about the need to prevent the disease.

Unfortunately, there is still a mentality on this aspect whereby we turn to the doctor only when we are faced with a symptom, men try to live up to the idea of ​​an indestructible virility from different points of view and that of the prevention of sexual health, in its several aspects, it is becoming more common in old age, the prostate is known to be kept under control, but it still cannot pass the importance of controls in adolescence and adulthood.

The situation today is slightly more improved, as men are concerned for their sexual potency and the slightest symptom of the dreaded ED can send them for a checkup at an urologist. But did you know that the drugs used for ED treatment can help fight ontological diseases, prostate tumors of benign nature and indirectly save lives through urging a man to have an appointment with a doctor who can detect the signs of a disease early on? 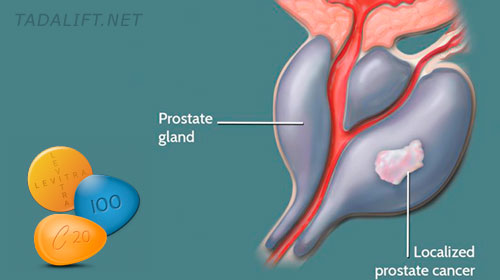 With the approval of sildenafil (Viagra), in the 90s, in the treatment of erectile dysfunction, an enzyme, phosphodiesterase type 5 (PDE5) became popular. Later it was discovered that selective inhibition of this enzyme could also be exploited in other areas such as pulmonary arterial hypertension and Raynaud’s syndrome. Now, however, it is being discovered that these drugs can also be useful in oncology. For example, if associated with immunomodulators, drugs so in vogue now in anticancer therapies, they increase their immunomodulatory activity while if associated with cardiotoxic chemotherapy, such as doxorubicin, they reduce its cardiotoxicity.

Thanks to their ability to overcome the blood brain barrier, they could find application in glioblastoma, as a therapeutic enhancer of anticancer drugs.

Doing a quick search (PDE5 inhibitors and cancer) on the PubMed search engine, one can state that many works published in the last few months come out. This confirms the recent clinical evidence, in the oncological field, of the selective cGMP phosphodiesterase inhibitors type 5 (PDE5), in particular sildenafil (Viagra), vardenafil (Levitra) and tadalafil (Cialis). Little information, however, can be found in this are on the latest approved of the series, avanafil (Spedra). It is a repositioning beyond their first indication, erectile dysfunction, and the second indication, pulmonary arterial hypertension.

This work reviews the three main PDE5 inhibitors and their clinical indications. It all started in the 1980s, with research by Pfizer on the use of one of these inhibitors, sildenafil, in angina pectoris. The clinical trial began in 1991. The unexpected “side effects” observed in male patients enrolled in the study convinced Pfizer to study this product in erectile dysfunction.