Testosterone is the so-called “male” hormone. This chemical substance, which is synthesized predominately in the testicles as well as in the ovaries and adrenal cortex although in lesser amounts, plays a crucial role in the normal functioning of the male body. In simple terms, it regulates a major part of metabolic, cognitive, and physical processes in men, not to mention the effects it provides on the functioning of the sexual functions. The production of this hormone reaches its peak during the period of sexual maturation. Unfortunately, in the course of time, catabolic processes involved in the biochemical transformations of the enzyme and its derivatives tend to overtop the anabolic processes. Consequently, the amounts of the free chemically unbound hormone in the blood constantly decrease.

Age-dependent testosterone deficiency is a highly specific disorder that differs greatly from most of the hormonal deficiencies in both the provided systemic effects and the long-term effects. This condition has some highly discriminative features, such as the decreased synthesis and further release of testosterone, as well as a set of specific corresponding negative effects. 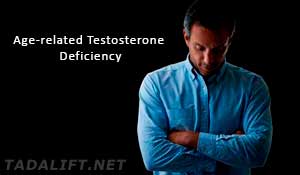 While this systemic decline of the anabolic processes is completely natural, it is, nonetheless, highly uncomfortable. However, such a decline does not suggest an obligatory age-dependent deficiency – the levels of the substance remain high enough to provide normal functioning of the male body within the limits established by the age difference.

The systematic health disorder may be indicated only when the said levels drop too low to maintain normal metabolic processes in the male body. The main reasons for such condition include secondary testosterone deficiencies, genetic disorders, pituitary disorders, abuse of steroid drugs of opioids, diabetes, obesity, etc.

In compliance with the current protocols, in order to diagnose this condition, it is necessary to find persuasive evidence of not only the decreased amount of the essential compound in the blood but also several typically occurring symptoms.

The most crucial signs of this disorder include the following symptoms: