Fatigue has become a usual condition for lots of people. The information presented by the Centers for Disease Control and Prevention claims that more than 10 percent of males and over 15 percent of the female population in the United States have faced with this condition. However, not everyone understands the reasons for continuous tiredness. Here are the five most widespread fatigue causes. 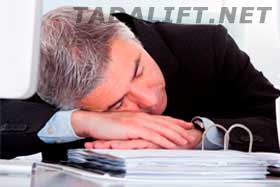 Both lack and excess of thyroid hormone may result in extreme tiredness. In the first case, it is connected with overall slowing down of all the body processes. Slow metabolism doesn’t let the body produce the amount of energy needed for normal functioning. As a result, a person feels tired all the time. On the contrary, an excess of the thyroid hormone makes all the organs and systems work under load, which may lead to fast exhaustion.

According to the National Sleep Foundation, an adult person should have at least 7-9 hours of night rest. In case these figures are smaller, a human organism may lack time to restore after a hard day. By systematically repeating this mistake, one may lead his physical and mental health to exhaustion.

Some people may feel tired in case the number of red blood cells is too low. They are responsible for the transportation of oxygen to every cell in the body. Hence, if they fail to perform this function, oxygen deficiency appears, and the person gets tired very fast. This condition may result from poor nutrition, serious loss of blood or body overload (e.g. during pregnancy).

If some nutrients prevail in a diet and some are in lack, a person may get tired very fast. People get energy from carbohydrates. Their lack may show through tiredness. Another problem, which may cause fatigue is a very small number of calories one gets. Such a condition is characteristic of people who are on a strict diet.

Situations, which make us nervous trigger the secretion of cortisol (a stress hormone). In case it is produced continuously, the body is working “on the edge”, which may become the reason of fast tiredness.